You are here: Home / Recommended Reading / What is the difference between Alzheimer’s and Dementia?

Frena Gray Davidson on “The Difference Between Alzheimer’s and dementia?”

“What’s the difference between Alzheimer’s and dementia?” asks a sensible middle-aged woman in my Alzheimer’s Boot Camp class for start-up family caregivers.

I’m always still amazed to find that is the most common question I get asked. So, writing as a non-medical long term dementia caregiver, here goes.

All Alzheimer’s disease is dementia but not all dementias are Alzheimer’s.

There are also dementias associated with other health conditions, but without their own special name. Such as lack of sufficient oxygen to the brain, Normal Pressure Hydrocephalus and dementia of the dying process.

There are temporary dementias, such as when an elder goes into hospital. It is quite common for someone to develop what looks like dementia but which tends to gradually clear up after returning home again.

The term dementia really only describes what we see. It is a syndrome of behaviors, brain function loss and memory issues that we see affecting a person. Dementia does not describe only memory issues. There are a lot of normal age-related memory issues which are not dementia — trouble remembering names, the title of a movie and so on.

When we see this collection of dysfunctions, that’s when we get that person to the doctor for a full Alzheimer’s investigation.

By the way, Dr Alzheimer’s Alzheimer’s disease is not really our Alzheimer’s. Back in the early years of last century, the good doctor Alzheimer researched what was then called “Pre-senile dementia” — what we now call early-onset dementia.

That is actually a bit of a mystery. Well, a big mystery. There is so far no actual marker for Alzheimer’s. There is no genetic marker, no chemical marker, even the physical deterioration is not absolutely Alzheimer’s beyond all doubt. This will undoubtedly change as research continues into this most-researched of all medical conditions.

A lot of people don’t realize an official diagnosis of Alzheimer’s is actually a default diagnosis. It is what remains after other knowable things have been eliminated — medication issues, liver test, blood test, cancer and so on. To me, a very non-medical person, it seems like saying someone has a cold but not knowing which virus caused it.

But hey, as long as they continue the search for the cure of the common cold — or, in this case, Alzheimer’s — I guess that’s okay for the moment.

Frena Gray-Davidson, an Alzheimer’s caregiver, support group facilitator and author of five books on caregiving including her latest, “Alzheimer’s 911: Hope, Help and Healing for Caregivers“, available from http://www.amazon.com. Frena presents direct care staff training in dementia behaviors and educates family caregivers at seminars and conferences nationally and internationally. You can find her website at http://alzguide.com/.

Originally from England, Frena Gray-Davidson came to the USA in 1986 (after several years in Asia/India). With over twenty years experience in Alzheimer’s care, her credits include: support group facilitator for the Alzheimer’s Association, keynote speaker for the Royal Alzheimer Society of Great Britain, international presenter of workshops on dementia, trainer/educator of dementia-care workers/family caregivers author of seventeen books. 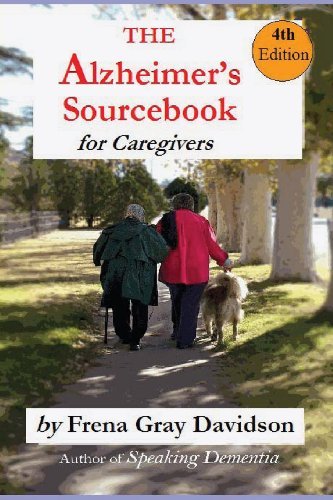 The Alzheimer’s Sourcebook, 4th edition: A Practical Guide to Getting Through The 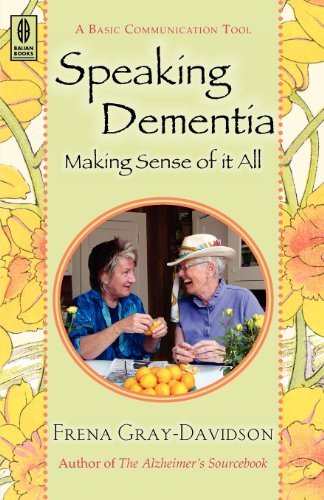