You are here: Home / Recommended Reading / Books Reviewed / The Best guide to avoid dementia -“The Essential Guide to Avoiding Dementia”

The Best guide to avoid dementia

“The Essential Guide to: Avoiding Dementia”

Mary Jordan, whose publications include books on Caring, End of Life and  GP Practice Management, in addition to articles in nursing and social care journals and magazines, answers a multitude of questions about dementia in this new book. “The Essential Guide to Avoiding Dementia.”

The information delivered in Ms Jordan’s book couldn’t come at a better time. In the next few decades hundreds of 1,000’s of baby-boomers will be facing decisions about dementia for themselves or a family member.

In this book Mary Jordan explains each kind of dementia and many of it’s causes and symtoms as well as things to do to lower your own risk of dementia. She talks about personality types; which ones are more prone to dementia, and which existing traits that tend to become more pronounced if one has dementia. She talks about lifestyle choices; alcohol and smoking and the increased risk to dementia that each causes. And she examines Stress and Trauma, Psychological Trauma, mental illness and hearing loss.

I was particularly impressed with Ms Jordan’s authority on hearing loss as my own mother suffered with hearing loss for many years prior to her Alzheimer’s diagnosis. Yet, I’d always felt the two were definitely related. Ms Jordan helped me to accept, they probably were, as those with severe hearing loss lose a sense of understanding their environment and that’s exactly what happened to my Mom.

She also discusses the things you can do to lower your risk of having dementia; such keeping a broad social network, staying active physically and mentally. The more you do to expand your presence and life, the more you lower the risks. Variety in a busy life seems significant. Mary Jordan provides Studies and Trials that discuss the brains plasticity and cognitive reserves that may be a factor in lowering risks of dementia. As books title states, Mary Jordan shares a plethora of ways to avoid or lower risks of dementia.

She talks about Exercise, Nutrition, Vitamins and their impact on dementia. She discusses Fats and Cholesterol and tells the reason why we need both for a healthy lifestyle.

Besides the Risk Factors, Remedies and Causes of Dementia, Ms Jordan also gives us an up close look at the brain, itself. She gives a description of the brain and tells it how it works, including an eye- opener about the brain’s elasticity and creating new links to neurons when old links have died from dementia.

I found it fascinating to learn about different behaviors by the person with dementia caused by damage in different areas of the brain. For example: In front-temporal dementia, damage is focused in the front brain. With this dementia, only personality or behavior issues occur in the beginning– memory problems don’t become obvious till much later. Each area of the brain affected, causes it’s own unique behaviors. More evidence that the person with dementia has little control of his own behavior.

Also included is a storehouse of Resources. Since Mary Jordan is from the UK, many are located in that area. She also has an Outstanding Glossary: Including all things related to dementia.

This book is a must-have for everyone because it is surely an Encyclopedia of dementia, an epidemic we all face in the coming years. 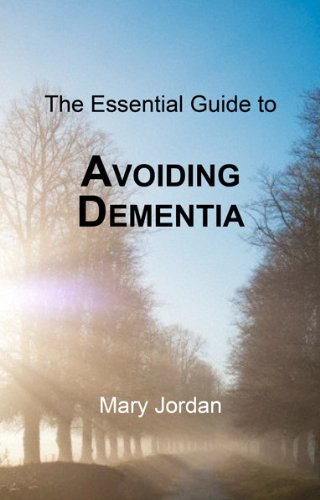 Author: Mary Jordan works for a national dementia charity and has had considerable experience caring for elderly relatives and friends who have suffered from dementia. Previously, she worked in the NHS for 9 years. Earlier publications include books on Caring, End of Life and on GP Practice Management in addition to articles in nursing and social journals and magazines. Find her at:  @HHealthBooks on Twitter.