You are here: Home / Archives for While I still Can

Diagnosed with Early Onset Alzheimer’s, Rick Phelps’ writes about and his diagnosis in his mid 50’s and the years since “WHILE I STILL CAN” by Rick Phelps

Rare is the chance to experience the nightmare of Early Onset Alzheimer’s Disease from the perspective of the patient coping with it everyday.

In this book, Rick Phelps, the founder of “Memory People,” an online Alzheimer’s and memory impairment support and awareness group for people with dementia along with their loved ones and  caregivers, tells it like it is.

Diagnosed at the age of 57 with this fatal disease, Phelps has decided to lift the veil of silence about Alzheimer’s. Rick Phelps with Joseph Leblanc have created an extraordinary read.

Through the pages of While I Still Can, Phelps affords an uncommon glimpse into the horrific world of memory loss, while at the same time telling his story of love, commitment, faith and courage, in the face of a catastrophic illness.

The new book can be purchased at Amazon, including the ebook for KINDLE. This book is a must read for anyone with Early Onset Alzheimer’s or their families, friends and care-givers. 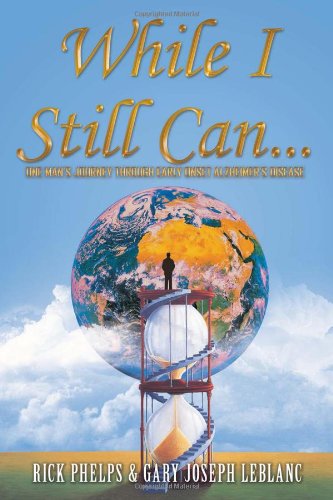 Rick Phelps, diagnosed with Early Onset Alzheimer’s, is also an Advocate for others. He’s watched his Facebook page, Memory People, with several hundred readers grow to many thousands.

Caregivers and folks who have Alzheimer’s or other dementias work together. They read, learn and share ways to help themselves and other battle the symptoms of this disease.