You are here: Home / Archives for nside dementia

Inside the Dementia Epidemic: A daughter’s Memoir

Martha Stettinius writes a page-turner as good as any novel I’ve ever read with “Inside the Dementia Epidemic — A daughter’s Memoir.”   But wait–this isn’t a novel. This is a true story that just happens to be one of the best ‘Guides’ I’ve seen when it comes to caring for a loved one with Dementia.

Happy childhood or not–Martha steps up to care for her mother through all the twists and turns of Dementia and memory loss; the maze of home care, assisted living and finally the dreaded nursing home. Through the process of caring Martha learns to know her mother and herself more than she’d ever have done without the traumatic journey into care-giving.

She allows feelings to surface and be shared with honesty for the reader. With courage Martha speaks of anger and resentment that all of us have felt while giving care to someone to the point of exhaustion. Exhaustion wrought as much from sadness as fatigue.

Doubts and concerns haunt Martha as she searches for answers for Judy’s care. Yet as I read, I’m awed by her persistence and investigative skills in pursuit of the very best for her mother, her beloved mother. I think her choices were outstanding and perfect.

When I walked this road with my own mother, I often found myself near paralyzed with fear; afraid to make any decision for making the wrong decision. No such fear gripped Martha. She was a researcher  she knew what she needed for the love of her Mom and she searched until she found it.

Martha explains in detail the major health fears and facts as we follow her years of care-giving for Judy; Urinary infections, Incontinence, Sexual Behavior, Anger, Fears and much more.
Besides the ups and downs of care-giving, this book is a guide to making optimum choices for your loved one as you traverse the long road into Dementia. As much information as any mini-encyclopedia about: Home-Care, Assisted Living, Nursing Homes, Alzheimer’s lock-down units, Financial Blunders and Burdens. 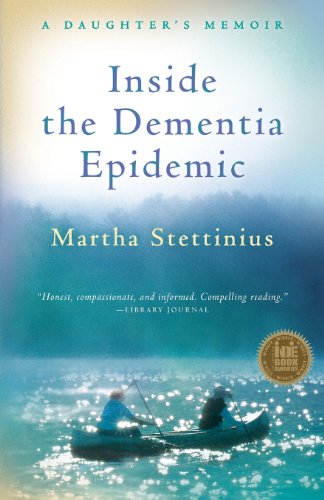 Inside the Dementia Epidemic: A Daughter’s Memoir

Martha supplements this mother-daughter love story with facts and appendices reflecting the cutting edge of dementia research. When her mother eats only sweets, she explores the connection: is Alzheimer’s “Type III Diabetes”? She refuses to surrender to hopelessness. She shares the ultimate guide to How to Save Yourself: an anti-dementia, anti-diabetic diet; and the newest medical tests. As Martha has learned to sit in silence and hold her mother’s hand, she has also learned to speak up, research, and reach out to give us all new ways to win the war.

artha Stettinius was a “sandwich generation” mom and the main caregiver for her mother, Judy, who had vascular dementia and Alzheimer’s disease. Martha serves as an expert in dementia for eCareDiary.com, and as a volunteer representative for New York State for the Caregiver Action Network (formerly the National Family Caregivers Association), a Washington, D.C.-based advocacy group. She has a website at: “Inside The Dementia Epidemic” a Daughter’s Memoir.  She works as an editor, and earned a master’s in English Education from Teachers College, Columbia University.