You are here: Home / Archives for hippocampos

What is Alzheimer’s Disease?

Many of us are brought into caregiving a loved one with Alzheimer’s disease without knowing What Alzheimer’s Disease really is.

I’ve often stated, David Shenk’s:  “The Forgetting: Portrait of an Epidemic” was the first I found while searching for understanding after my Mom’s diagnosis of Alzheimer’s.

Most of what I knew, thought, and believed about Alzheimer’s was wrong and I was filled with fear about what Mom and myself (as her caregiver) would ultimately face in the future.

“The Forgetting,” is the most comprehensive book I’ve read about Alzheimer’s and I’m glad that it was also the first book I read. There are few caregiver’s stories and more basic facts. Yet, that’s what I needed to understand in the beginning when I had no caregiver stories of my own to compare.

Recently, a friend suggested that I view a new video at You Tube. “What is Alzheimer’s?”

Like “The Forgetting,” she said, this new video makes understanding Alzheimer’s simple and clear.

I watched the video and was surprised to see how simply it explained such a complicated disease. “What is Alzheimer’s?”

After viewing this video, you’ll find many questions answered about origin and nature and the progression of Alzheimer’s on the human brain. It’s Brief but enlightening.

After viewing it myself, I was not surprised to learn that it had been Written and Directed by David Shenk.

View the Video “What is Alzheimer’s” below,  and let us know what you think –

What is Alzheimer’s – You Tube 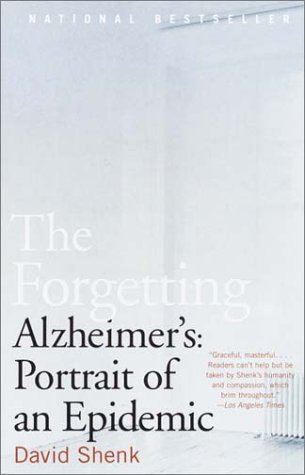 The Forgetting: Alzheimer’s: Portrait of an Epidemic

Afflicting nearly half of all persons over the age of 85, Alzheimer’s disease kills nearly 100,000 Americas a year as it insidiously robs them of their memory and wreaks havoc on the lives of their loved ones. It was once minimized and misunderstood as forgetfulness in the elderly, but Alzheimer’s is now at the forefront of many medical and scientific agendas, for as the world’s population ages, the disease will kill millions more….