You are here: Home / Archives for can’t eat

Helping the person with End Stage Alzheimer’s to eat

During any holiday season there will be many festive dinners. Friends, family and other loved ones will be joining together to celebrate life and the holiday.

A festival of food and celebrations that remind us all of our loved ones with end stage Alzheimer’s dementia who can no longer chew, nor sometimes taste the savory flavor of a holiday dinner.

A liquid diet works well while the person with Alzheimer’s can still sip from a bottle or straw, as many health drinks provide multiple nutrients for those who can not chew.

With The Bullet, Nutri Bullet or other Juicers, most foods can be pureed until easily swallowed by someone with health issues, yet still provide the nutrients that they need. Later on, when they no longer remember how to swallow, it becomes a little more difficult.

Ensure and other health drinks are super nutritious, easier to swallow as they are thinner and most taste similar to a milk shake. But knowing how to suck on a straw or even swallow eventually evaporates from the memory as well.

Lori La bey (the webmaster at Alzheimer’s Speaks) has written a fantastic article about feeding her own mother from a straw. With text and photos of the exact process, I refer to this article often when asked how to assist a loved one who can no longer chew.

My Mom, in her end stages of Alzheimer’s disease now has trouble sipping or sucking to get her fluid intake at times.  This doesn’t happen all the time but when it does I have learned one of the easiest ways to get liquids in her is to use a straw  kind of like an eye dropper.  I use an adjustable straw as seen in the photos. And you’ll also see pictures of Mom and I using this technique. Read More….

During the late-stage of Alzheimer’s, the disease moves into the frontal lobes of the brain. When this area is damaged, the person loses the ability to interact properly. During this stage it is often difficult for the caregiver to take care of the Alzheimer’s sufferer at home and many choose to place the person in a nursing home.

Because the frontal lobes are involved during this last stage, the person with Alzheimer’s will lose judgment, reasoning, and social skills. Their behavior will most often be inappropriate and sometimes angry. People in the late-stages can become violent, docile, apathetic or immobile. It isn’t the same for everyone, each person may behave differently, but most of the brain functions of the frontal lobes are involved by late-stage.

Often the person with late-stage Alzheimer’s is bedridden. If your loved one is not, don’t expect them to be socially active. People with late-stage Alzheimer’s tend to withdraw from social events. They sleep more and socialize less. It could be that they’ve lost a sense of “who they are,” just as they’ve forgotten their loved ones and others. So the need for socializing slips away as an irritation with lots of chatter or noise in the background becomes more annoying to them.

Since they no longer remember the intricacies of social etiquette and  their judgment is impaired, they may do things that will embarrass you or cause them ridicule if forced into an unfamiliar situation. So it’s better to decline such activities as weddings or parties or family gatherings or holiday traditions where many people are involved.

The person with late stage Alzheimer’s can not tell you what is best for him. Their wishes can only be carried out through documents that were prepared earlier before Alzheimer’s progressed to this stage. Documents such as Power or Attorney and Medical Power of Attorney and any Living Will must be signed prior to this stage. The caregiver will need to make most major decisions.

During this stage you or family members will need to know about their housing, finances, insurance and other financial matters.

Though you talk slowly and calmly, the person with late stage Alzheimer’s may not always understand. Yet, the senses still remain even in late-stage Alzheimer’s. Though they can’t understand what you say, they will certainly “feel” any kind touches you offer such as; a gentle massage to hands and feet with lotion, brush strokes as you comb their hair, a gentle hug, or other touching that is pleasurable to them. Be attentive to dressing them and cleanliness always treating them with the utmost dignity.

Even in late stage Alzheimer’s, they can feel pain. Watch their expressions for a frown, or grimace or groan of pain. After long months of caregiving, ‘knowing when they feel pain’ can become like second-nature to you. A twist of their mouth can be a toothache, rubbing the side of their face an earache, etc.

People in late-stage Alzheimer’s can eventually forget how to swallow. With this in mind, try softer, pureed foods. Malts and milkshakes are a great treat. Clear liquids can be given through a straw or oral syringe when they can no longer suck on a straw.

Never rush them while they are eating as this could cause choking.

If someone with late-stage Alzheimer’s is  bedridden, a big concern is bed sores since they are unable to  turn them self over. They will need to be turned over often, not only to prevent bed sores but for their comfort as well.

They will also need to be bathed and fed and kept comfortable. Since communication at this time is usually limited to a few words, their care must be offered without request.

At this time, a person with Alzheimer’s needs comfort and dignity. Pleasant, low background music can be soothing. Soft, cuddly pillows or stuffed toys can offer comfort. Warm socks on their feet help sound sleep. A crocheted afghan across their lap can stimulate their sense of touch with the gently ribbed yarn.

While my Mom stayed with us, I purchased “The Bullet” as seen on TV. I thought it would be helpful because I could make single portions without the big mess of a conventional Food Processor. It worked great for Mom and the grand-kids love it too. As soon as they’re in the door we hear, “Nana, can we have a bullet?” They want their custom made “smoothie” of choice. I can’t say enough about The Bullet. It sits on our cabinet and is used daily. 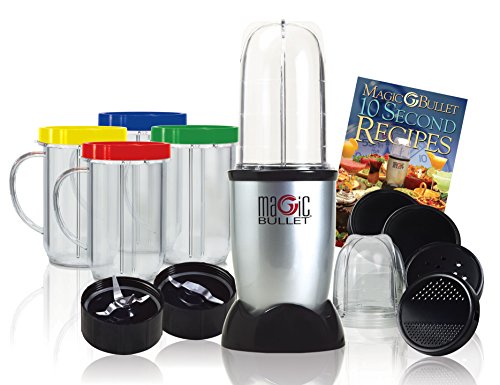 Durable see-through construction; press down for results in 10 seconds or less